Dropping at 70 miles per hour vertically into Oblivion has to be much scarier when you can’t see where you’re going. So a wispy blanket of fog, floating eerily around the vertical tunnel mouth, was rated a definite plus at the planning stage of the new Alton Towers white-knuckle ride, the first vertical roller coaster in the world. 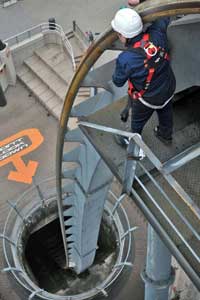 John Wardley, consultant director of the Tussauds Group, whose job it is to dream up new attractions, certainly conceived a nightmare with this one, especially for anyone with no head for heights. The 60 metre drop (half above and half below ground) for those struggling to imagine it, has been compared with jumping off the 16th floor of Canary Wharf.

But because of the size of the passenger vehicles, the tunnel mouth is a huge concrete shaft the size of a motorway underpass. “Without some element of concealment it would just look like a gigantic piece of civil engineering,” said John.

“We needed a means of creating fog around the tunnel entrance so that, as the vehicles poised at the top of the drop, and hung there, with the riders looking straight down at the hole in the ground, the fog would hide the structure and add an element of mystery. Also it would create a disorientating environment as the riders dropped through the tunnel.”

The Mee Fog system pumps tap water at 1,000 pounds per square inch through patented stainless steel nozzles, atomising it into droplets one tenth the diameter of a human hair. The droplets are so small that they stay suspended in the air like clouds, and don’t feel damp like larger droplet mist systems. On Oblivion, the water vapour pours from two rings of fine jets, a 90 nozzle ring just above the tunnel mouth, and a 20 nozzle ring high on the perimeter fencing

On day one the fog worked so well that it obscured not only the tunnel mouth, but also the camera’s eye view of the riders poised on the brink, relayed to those waiting in the queue. It had to be turned off while the cameras were moved to a better vantage point. But then, adjustments made, the fog was back in action, billowing eerily around the ride, adding even more excitement to one of the hottest new thrills around.

You can watch the launch video for Oblivion below.